Canaanite temples were built according to a basic three-part plan: a courtyard in front, a main hall behind it, and a small 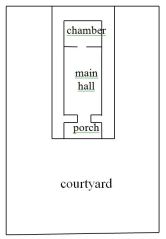 sacred chamber at the back containing a statue of the temple’s god. There were often additional rooms at the sides of the main hall for practical use by the temple’s priests and functionaries, but religious rituals happened in the courtyard, main hall, and back chamber.

During the course of the Hebrew Bible, the Israelites construct three sanctuaries. The portable Tent of Meeting that Moses assembles at the end of the book of Exodus travels with the people from Mount Sinai all the way across the Jordan River. It is erected in several locations while the Israelites are gradually conquering Canaan: Gilgal, Shiloh, Nob, Givon, and then Jerusalem. King Solomon builds the first temple in Jerusalem in the first book of Kings, and the construction of the second temple in Jerusalem begins in the book of Ezra.

All three of these sanctuaries follow the basic three-part Canaanite plan. But since the Israelites are forbidden to make an image of God, the innermost chamber at the back cannot contain a statue of their deity. So what is inside the “holy of holies”?

This week’s Torah portion, Pekudei (“Inventories”), says what Moses put into the holy of holies in the Tent of Meeting.

eidut (עֵדֻת) = testimony—of a witness or of God. (The Torah often uses this word to refer to the second pair of stone tablets Moses brings down from Mount Sinai.)

What does the aron look like? In the book of Exodus, it is a gold-plated wooden box about four feet long, with carrying-poles attached to the bottom. Last week’s Torah portion, Vayakheil, describes how the master artist Betzaleil makes the lid of the aron:

Then he made a cover of pure gold, two and a half cubits long and a cubit and a half wide. And he made two keruvim of gold; he made them hammered out from the two ends of the cover. One keruv from this end and one keruv from that end; from the cover he made the keruvim, from its two ends. And the keruvim were spreading wings upward, screening off with their wings over the kaporet; and their faces were toward each other, toward the cover were the faces of the keruvim. (Exodus 37:6-9)

keruv (כֱרוּב), (plural keruvim)  = a hybrid beast with wings and a face. (See my earlier post: Terumah: Cherubs Are Not for Valentine’s Day.)

What are the wings of the keruvim on the cover screening off? The space above the golden lid is empty—or, at least, nothing is visible there. But the Torah treats the aron as a throne for an invisible, although not inaudible, god.

Moses came into the Tent of Meeting to speak with [God]. Then he heard the voice speaking to him from above the cover that was on the aron of the eidut, from between the two keruvim; thus [God] spoke to him. (Numbers/Bemidbar 7:89)

The keruvim and the lid of the aron are a single piece of gold in the Tent of Meeting. But in the first temple, they are separate items. While the aron stays in the tent where King David put it, King Solomon’s craftsmen make two keruvim out of olive-wood overlaid with gold. Each keruv is ten cubits (about 15 feet) tall, with a ten-cubit span from wingtip to wingtip.

The haftarah reading corresponding to the Torah portion Pekudei is from the first book of Kings. It describes the ceremony after the first temple in Jerusalem is completed, starting with a procession as King Solomon and elders from all over Israel accompany the aron on its short journey from the tent in the old city to the new House of God.

The priests brought in the aron of the covenant of God to its place, to the back room of the House, to the holy of holies, to underneath the wings of the keruvim. For the keruvim were spreading wings toward the place of the aron, so the keruvim screened off the aron and its poles from above. (1 Kings 8:6-7)

In both the Tent of Meeting and the first temple, there is an empty space between the lid of the aron below and the wings of the keruvim above. God’s voice or presence is never located inside the aron, only in the space above it.

Yet inside the aron is the eidut, God’s testimony. Commentary on the Tent of Meeting agrees that the eidut means the second, unbroken, pair of stone tablets inscribed by God on Mount Sinai (also called Choreiv). Commentators disagree on whether the aron also contained the shattered tablets, and/or a scroll that Moses wrote.

The first book of Kings clarifies the contents of the aron in the time of the first temple:

There was nothing in the aron but the two tablets of stone that Moses placed there at Choreiv, when God cut a covenant with the children of Israel after they left the land of Egypt. (1 Kings 8:9)

The first temple was sacked several times, and when the Babylonian army captured Jerusalem in 586 B.C.E. they razed it altogether. The keruvim and the aron were never recovered. So in the second temple, which was begun in 538 B.C.E., the holy of holies was an empty room. But priests still treated it as the locus of God’s presence.

After the Romans destroyed the second temple in 70 C.E., Jews had to find God’s presence in other places. Today, many of us search for God by going inside ourselves: pondering what we have learned, questioning our feelings, meditating, sinking into ritual, praying with intention, and so on. This inner journey in search of God also has stages.

If the first stage of your search is like the courtyard of the Tent or temple, does your courtyard have an altar for animal sacrifices and a basin for washing? If you push on into the main hall, does it have any of the furnishings of the Israelite sanctuaries: a lampstand for light, or a table for bread, or an altar for incense? And if you keep searching even deeper, what do you find in your holy of holies?

Is God present there?

4 thoughts on “Pekudei & 1 Kings: A Throne for the Divine”