What does God want from us?

With what shall I come before God?

(With what) shall I soothe God on High?

Shall I come before Him with olot?

With calves a year old?

Would God be pleased with thousands of rams?

With ten thousand streams of oil?

Should I give my firstborn for my rebellion,

olot (עוֹלוֹת) = plural of  olah (עוֹלָה) = rising-offering. In an olah an entire slaughtered animal offering is burned up into smoke. (From the root alah (עלה) = go up.)

In this week’s haftarah, the prophet Micah mocks Israelites who try to buy God’s favor by making impressive offerings on the altar. Everyone has a price, these people think, even God. I can get God to forgive my moral shortcomings if I pay the right price.

In last week’s haftarah, Yiftach (“Jephthah” in English), the new chieftain of Gilad, tries to win God’s favor for his upcoming battle with the Ammonites. (See last week’s post, Haftarah for Chukkat: Judges—A Peculiar Vow.) He has no idea what kind of gift God would like; God does not speak to him.  But he knows what kind of gifts other people donate to their gods.  His fellow Israelites serve God by slaughtering livestock and burning them on God’s altar. An even bigger offering, for the people in that region, is to sacrifice one’s own child—preferably one’s firstborn son—to a god.

(Abraham almost does this in Genesis chapter 22; the king of Moab does it in 2 kings 3:27, the Israelites sacrifice their children to Molech in Jeremiah 7:31, and Psalm 106:38 claims that the Israelites “shed innocent blood, the blood of their sons and their daughters, whom they slaughtered for the idols of Canaan”.)

Yet elsewhere, the Bible makes it clear that human sacrifice is completely unacceptable to the god of Israel. Yiftach’s messages to the king of Ammon show that he is well versed in the history of the Israelite conquests east of the Jordan River, as related in the book of Numbers—and perhaps added to Yiftach’s story by the editor of the book of Judges.

But in the original story of Yiftach and his daughter, does Yiftach know about the ban against human sacrifice?

He has only one child, his young adolescent daughter. And he has just been given his father’s position as chieftain of Gilad. The best thing a man can hope for, in his culture, is to pass on his position and his property to descendants. Yet everything depends on winning the war with Ammon.

So Yiftach does not choose between sacrificing an animal or a human; he lets God (or fate) decide.

And Yiftach vowed a vow to God, and he said: “If You definitely give the Ammonites into my hand, then it will be the one that goes out from my door of my house to meet me at my safe return from the Ammonites—[that one] will be for God, and I will make him go up as an olah.” (Judges 11:30-31)

Maybe Yiftach hopes a bull or a ram will trot out of his house when he comes home. Or maybe he expects a male slave to open the door.

Yiftach wins the war, and his troops capture twenty towns from the Ammonites.

And Yiftach came … to his house, and hey!—his daughter was going out to meet him, with tambourines and with dancing.  And she was an only child; he had no other son or daughter. As he saw her, he tore his clothes [in grief] and he said: Ah! My daughter, I have certainly been knocked down to my knees! (Judges 11:34-35)

Women in the Bible often sing and dance with tambourines when their military heroes come home in triumph.  They do it for Saul and David in the first book of Samuel. Yiftach’s wife is absent from the story, so his adolescent daughter takes on the job.

Some commentators, from the Talmud and the Midrash Rabbah on Leviticus (5th-7th century C.E.) to Rashi (Rabbi Shlomo Yitzchaki, 11th century C.E.) to Robert Alter (2013), conclude that Yiftach actually does sacrifice and burn his daughter on the altar.

Another line of commentary, from Resh Lakish in the Midrash Rabbah on Ecclesiastes (6th-8th  century C.E.) to Abraham Ibn Ezra (12th century C.E.) to Jonathan Magonet (2015), argues that Yiftach does expect a human being to come out the door, but he does not intend to make a human sacrifice. Instead, he plans to dedicate the person to God by paying the priests of Gilad in silver, which they can then use to buy sacrificial animals for a big olah. This is an approved procedure in the book of Leviticus/Vayikra (probably written in the 6th century B.C.E., about the same time that the stories in the book of Judges were collected and edited).

Yiftach does not vow to give God “the value of a human”, but he does vow that the human concerned “will be for God”—and also that he will (according to this theory) turn that person into a symbolic olah by paying the priests the correct amount of silver.

But Yiftach tears his clothes in grief. That means that either Yiftach does intend to slaughter a human being—his own daughter—on the altar; or a piece of the story is missing.

I suspect that the redactor who assembled the book of Judges omitted something—because the rest of the story of Yiftach’s daughter is about celibacy, not death.

She calmly tells her father that he must carry out his vow, and asks him to delay it for two months. 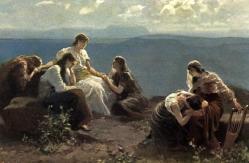 “Let this thing be done for me: I shall go down on the hills and I shall weep over my betulim, I and my (female) companions.”  And he said: “Go.”  And he sent her off for two months, her and her companions, and she wept for her betulim on the hills. And at the end of two months she returned to her father and he carried out his vow that he had vowed. And she, she had never known a man. And it became a custom in Israel: for all of her days, the daughters of Israel went to sing for the daughter of Yiftach the Giladite, four days in the year. (Judges 11:37-40)

betulim (בְּתוּלִים) = virginity; celibacy; evidence (of blood on a sheet) of being either virginal or not pregnant.

A period of two months has no special significance elsewhere in the Bible, but it is the right length of time for a woman to wait to make sure she has a menstrual period and is not pregnant.

I think Yiftach’s daughter is reminding him of another alternative to human sacrifice.

According to the Torah, an Israelite woman can achieve a higher level of holiness only by becoming a nazir for a period of time and abstaining from alcohol and grape products, hair care, and being near a dead body.  This would not count as a substitute for an olah.  But in neighboring Mesopotamia a woman could serve a goddess in several other ways: as a temple sex worker, as a high priestess who had sex only with a god, or as a nun who lived communally in a special part of the temple complex.

Neither a priestess nor a nun was allowed to have children.

Israelites in the Bible frequently worship other gods in addition to the God of Israel, and at times they confuse their god with another local god. Perhaps Yiftach’s daughter and her companions weep ritually at one or more hilltop shrines (bamot) dedicated to other gods. Then, once she has proof that she is not pregnant, her father gives her to God—to some god, anyway, a god that will accept her as a priestess or a nun.

That would explain why, after Yiftach has carried out his vow, women of Israel are able to go and “sing for the daughter of Yiftach the Giladite, four days in the year”—for the rest of her life.

Yiftach still grieves, because now he will have no grandchildren.  And his daughter laments for at least two months because now she will never “know” a man or have a child. But by borrowing from another religion, she finds a way to make herself a gift to God by living, not dying.

Later in the Bible, prophets from Isaiah to Malachi point out that although animal offerings in the temple are fine if performed in the right spirit—and to the right god—what God really wants is for people to behave ethically toward one another.  The prophet Micah says it best in this week’s haftarah, after he has mocked Israelites who try to buy God’s favor with sacrifices.

He told you, humankind, what is good

And what God is seeking from you:

Only to do justice,

If only Yiftach knew that was what God wanted! Then he could have vowed: “If You definitely give the Ammonites into my hand, then, as chief of Gilad, I will do justice and pursue kindness and be humble.”

If only we all dedicate ourselves to being just, kind, and humble, it will be a gift to the whole world.