During the week of Passover/Pesach, we pause in the annual cycle of Torah readings to commemorate the story of the liberation from slavery in Egypt. The first evening of Passover (or the first and second evenings, in some traditions) is devoted to the seder, a 14-step ritual with a meal and a story that goes from the beginning of Exodus through the crossing of the Reed Sea. One of the many songs in the ritual can be translated as “We were slaves; now we are free!”

After the excitement of the seder or seders, Jews are supposed to spend the rest of the week of Passover eating matzah and eschewing all other grain products. On the Shabbat that falls during this week we get two special readings. The Torah reading comes from later in the book of Exodus, when God proclaims Its “thirteen attributes” to Moses on top of Mount Sinai.1 The haftarah reading is a vision from the book of Ezekiel.

The hand of God came over me, and it brought me out by the ruach of God and set me in the middle of the broad valley [which] was full of bones. And it swept me over them, around and around, and hey!—there were very many on the surface of the broad valley, and hey!—they were very dry.  And [God] said to me: “Son of humankind, will these bones become alive?   And I said: “My lord God, [only] You know.”  (Ezekiel 37:1-3)

Ezekiel uses the phrase “the hand of God came over me” to mean that God overpowered him and compelled him to enter his vision.2 After asking Ezekiel if the dry human bones can come to life, God tells his prophet what to say to the bones.

And I prophesied as I had been commanded. And a sound happened, as I was prophesying, and hey!—a clatter!—and the bones drew close [to each other], a bone to its bone. Then I looked, and hey!—they had sinews and flesh on them, and skin spread over them. But there was no ruach in them.  (Ezekiel 37:7-8)

Next God instructs Ezekiel to bring breath—or spirit—into the bodies by saying:

Thus said my lord God: Ruach, come from the four ruchot, and blow into these slain, and they will become alive. And I prophesied as [God] commanded me. And the ruach came into them, and they became alive, and they stood up on their feet—a very, very great force.  (Ezekiel 37:9-10)

What does this vision mean? Some early commentators viewed it as a literal statement that some dead Israelites were, or would be, resurrected.3 But in the book of Ezekiel, God explains the vision as a metaphor or parable.

And [God] said to me: “Son of humankind, these bones are the whole house of Israel.  Hey! They are saying: ‘Our bones are dried up, and our hope has perished, and we are cut off’. Therefore prophesy, and you shall say to them: ‘Thus says my lord God: Hey! I, Myself, am opening your graves, and I will lift you out of your graves, My people, and I will bring you back to the soil of Israel. … And I will put My ruach inside you, and you will become alive [again], and I will put you back on your soil.  (Ezekiel 37:12, 14)

The book of Ezekiel was written in the 6th century B.C.E. during the Babylonian Exile. When the Babylonians conquered Judah, the southern kingdom of the Israelites, they deported its leading families to Babylon, including Ezekiel’s family of priests.  Ezekiel prophesied to his fellow exiles, who were inclined to despair of either returning to their old land, or building new lives among the Babylonians, who treated them as paroled prisoners. 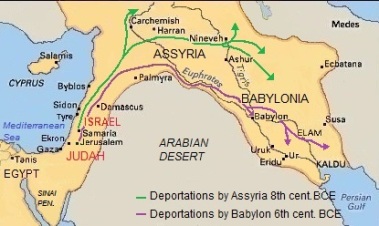 After showing Ezekiel the vision of the dry bones coming to life, God tells Ezekiel to give new hope to “the whole house of Israel”: both the Israelites from the kingdom of Judah who have given up on their lives in Babylon, and the Israelites whom the Assyrians had deported from the northern kingdom of Israel about 150 years earlier.

It is never too late to come to life again.

At the beginning of Passover, we tell the story of God’s ten miracles and how God, with the prophet Moses, leads a few thousand subjugated people out of Egypt to a new land that will become their own.4 On the Shabbat during Passover, we read about God’s demonstration to Ezekiel that miracles are still possible, and God can liberate the subjugated people in Babylon and give them a new life ruling their old homeland.

May everyone today who slides toward despair receive the ruach to hold onto hope instead. May we all create new lives for ourselves, and build good countries wherever we may be.  It is not too late.

3  In the Babylonian Talmud, Sanhedrin 92b, the rabbis argue about whether Ezekiel’s vision is a parable, or whether he actually resurrected some long-dead skeletons. Rabbi Yehudah bar Batyra claims to be a descendent of one of the resurrected men!

4  Unfortunately, the “promised land” in the Torah is already occupied by Canaanites. In the book of Joshua the ex-slaves from Egypt have to fight and defeat the indigenous peoples in order to take over their land. History often clashes with morality. It is a challenge today to provide liberty and justice for all the people residing in a country.