Spies scout out the land the Israelites will conquer in both the Torah portion and the haftarah reading this week. The twelve spies Moses sends in the book of Numbers do not speak to anyone in Canaan, and ten of them say the natives are fearsome giants who the Israelites could never defeat.  The results of this report are disastrous.  (See my post Shelach-Lekha: Too Late.)

When God lets the next generation of Israelites enter Canaan (after 40 years in the wilderness) their new leader, Joshua, sends two spies across the Jordan River into the nearest town, the walled city of Jericho. These spies view the Canaanites of Jericho as ordinary human beings.  They go through the city gate during the day, when strangers are allowed in for trading, and converse with at least one of the natives.

And Joshua son of Nun secretly sent two men, spies, from Shittim, saying: Go see the land and Jericho.  So they went, and they came into the house of a woman of zonah, and her name was Rachav, and they lay down there.  (Joshua 2:1)

zonah (זוֹנָה) = prostitute. From the verb zanah (זָנַָה) = have illicit intercourse, practice prostitution for profit or for a Canaanite religion, be faithless to a husband or to God.

In the ancient Near East the custom was for a stranger to wait in the town plaza (or rachov (רָחֹב) = open place) until someone offered him shelter (as in Judges 19:15-20).  Joshua’s spies would not want to be that conspicuous, so they go into the prostitute’s house instead.

The story gets off to a racy start, with the men “coming into” and “lying down” in her house, and the sexual humor continues with more double meanings as the tale unfolds.

Alas, someone observes them entering Rachav’s house, recognizes them as Israelites from the vast camp across the Jordan, and reports it to the king of Jericho.

And the king of Jericho sent to Rachav, saying: Bring out the men, the ones who came into your house, because they came to scout out the land!  (Joshua 2:3)

At this point, a loyal citizen of Jericho would produce the two spies.  But Rachav seizes the opportunity to switch her loyalty.

And the woman took the two men and she hid them. Then she said: Indeed, the men came to me, but I did not know where they were from.  And the gate was going to close at dark, and the men went out.  I do not know where the men went. Chase after them quickly, because you can overtake them!” But she had taken them up to the roof, and she had hidden them among the flax stalks, the ones stacked for her on the roof.  (Joshua 2:4-6)

After the king’s men are gone, Rachav follows up on her defection by climbing up to her roof and speaking to the two Israelite spies. She begins:

“I know that God has given to you the land, because terror of you fell over us…” (Joshua 2:9)

Everyone in Jericho heard how the God of Israel dammed the Reed Sea for the Israelites when they left Egypt, she says, and how the Israelites recently destroyed the Amorite kingdoms of Sichon and Og.

“And we listened, and it melted our heart, and the will to live could not rise again in any man facing you. Because God, your god, is god in the heavens above and over the land below.”  (Joshua 2:11)

Here Rachav declares her faith in the God of Israel over the local god or gods of Jericho.  Next, she asks the two spies to help her and her family defect to the Israelites.

“And now swear, please, to me, by the God, because I acted chessed with you, and so you should act chessed with my father’s household. (Joshua 2:12)”

They agree on a deal: Rachav will not tell on the two spies, and she will leave a red cord hanging from her window, so they can identify her house when the Israelites attack.  Then the Israelites will rescue everyone inside her house from the destruction of Jericho.

Most commentary, from the Tamud on, views Rachav’s defection as a sincere conversion to the God of Israel. Tikva Frymer-Kensky, in her brilliant analysis in Reading the Women of the Bible (2002), interpreted Rachav’s statements “I know that God has given to you the land” and “God, your god, is god in the heavens above and over the land below” as a formal declaration of her faith in the God of Israel and conversion to Israel’s religion.

Some modern commentators also interpret Rachav’s chessed as kindness to the spies.  Tikva Frymer-Kensky translated chessed as “benevolently”.  Although Rachav may have been moved by kindness, like the stereotypical hooker with the heart of gold, she uses her initial act of hiding the spies as a bargaining chip: in exchange for her loyalty to them, they must swear loyalty to her.

Why does a person defect to another religion and/or to another country?  What motivates someone to abandon a lifelong allegiance and commit to a new loyalty—becoming a traitor or apostate to their former people?

Some defectors do switch sides because of a passionate conviction in a matter of principle.  If Rachav is one of these, maybe she is so impressed by the story of the parting of the Reed Sea that she becomes convinced that the god of Israel is the highest god in the world, and decides she must become an Israelite even if it means betraying her people.

On the other hand, some people defect, or emigrate, because their lives have become too difficult in the old religion or the old country. The economy has tanked and they can no longer make a living; the sub-group they belong to is suffering from discrimination; or war has come to their country and they fear for their lives.  Unlike their compatriots who blindly continue to serve their old allegiances, these defectors use intelligence and courage to seize an opportunity for radical change—in the hope that the group they are joining will provide them with a better life. 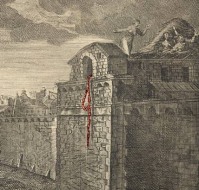 I think Rachav is this second kind of defector.

As a zonah, a prostitute, she occupies a marginal role in the society of Jericho, symbolized by her living quarters in the wall marking the edge of the city.

The word zonah comes from the verb zanah, which means both practicing prostitution and being faithless to a god.  She is willing to be faithless to her old god, and commit herself to a new one, if it seems like the best solution.

Her name, Rachav, is related to the word rachov = open place, town plaza, where strangers wait hoping someone will offer them shelter for the night. Rachav shelters the spies overnight, then asks them for shelter from the coming destruction of Jericho.

Her belief that the Israelites and their god will destroy Jericho is rational. There are hundreds of thousands of Israelites, and they have a record of success: their God made a miracle for them at the Reed Sea, and they vanquished the larger countries ruled by Sichon and Og. Even if Jericho’s double wall withstood an onslaught of Israelites, her town would lose in a siege.

Desperate to save herself and her family from death, Rachav courageously seizes the opportunity to switch sides by helping the Israelite spies, converting on the spot to their religion, and making them swear to rescue everyone in her house when the city falls.  She is an opportunist for a good cause—saving the lives of her whole family.  She is a rational defector.

And Joshua let her live, Rachav the zonah and her father’s household and everyone who was hers, and she [her clan] dwell in the midst of Israel to this day…  (Joshua 6:25)

May we all have the courage to seize the moment and abandon old allegiances when we must do so for a greater good.  And may we honor all people who courageously escape with their families from war, and commit to a new country.