For me, every story in the book of Genesis/Bereishit is another fruit from the Tree of Knowledge of Good and Evil. And the God who speaks to individual people, from Adam to Jacob, is like a human teacher trying to prod people into making conscious choices and moral judgments.

Like other animals, we humans make most of our decisions automatically, out of instinct and habit. Sometimes we stop to solve a practical problem or an intellectual puzzle. But only rarely do we stop to solve a moral problem. When we do become aware of a moral issue, and of our ability to choose between good and evil actions, I think we are tasting another fruit from the Tree of Knowledge.

The anthropomorphic God in Genesis often talks to Himself, debating what to do next. He also talks to human characters, asking them questions, telling them His plans, blessing and cursing them, making covenants with them, and giving them directions.

“God” tries out several methods for giving directions. In the second creation story, “God” makes a single human out of dirt and breathes life into it. After placing the human (ha-adam) in the garden of Eden, the God character gives it an instruction.

God tzivah the human, saying: From every tree of the garden, certainly tokheil. But from the tree of the knowledge of good and bad, not tokhal; for on the day you eat from it, you will certainly die. (Genesis 2:16-17)

It is impossible to translate this passage literally, because biblical Hebrew has only one verb form for action that has not yet happened. Is “God” telling the human “you must not eat” from the tree of knowledge, and if you do, you will be punished with death? Or is “God” saying “you could not eat” from it without becoming mortal?  Either translation is correct.

The God character’s motivation in giving this order is also open to interpretation. Classical commentary assumes “God” wants the human to stay in the garden, in a state of moral ignorance, and therefore after the female and male humans eat the fruit, they are punished for disobeying orders. I think “God” points out the Tree of Knowledge in order to show the adam, the solo and sexless human, that it can act of its own free will, and gain knowledge. But the adam passively follows orders, and nothing changes. I can imagine the God character wondering what it will take to get the humans to make a choice and acquire a sense of good and evil, so He can remove them from Eden and place them in the real world! “God” solves the problem by splitting the human it into male and female persons, and inventing the snake to make the female human think.

The next person in the Torah to get moral training is Cain, who gets upset when God shows a preference for Abel’s offering over his. Perhaps because reverse psychology did not work well with Adam, “God” avoids anything that sounds like an order when He first addresses Cain.

And God said to Cain: Why are you making yourself angry, and why has your face fallen? Is it not so: if you do good, [there is] uplifting; but if you do not do good, wrongdoing waits at the door, and its desire is for you. Yet you can rule over it. (Genesis 4:6-7)

Cain does not get the hint, and in a fit of rage kills his brother Abel.

In the story of Noah, the God character tries a different approach.

God said to Noah: The end of all flesh is coming before Me, because the earth is filled with violence on account of them, and here I am, the one Who destroys the earth.  Make for yourself a floating-container of gofer wood; you shall make the floating-container compartmented, and you shall cover it inside and outside with caulking. (Genesis 6:13-14)

If what “God” wants is for Noah to obey orders, His new style works. Noah simply follows orders, and makes no independent decisions until after the flood. But commentators have wondered for millennia whether Noah’s mechanical obedience is actually what “God” wants. (See my post last week, Noach: Righteous Choices.) What if “God” is hoping that Noah will propose an alternative, the way Abraham does later when “God” announces He will destroy Sodom and Gommorah? 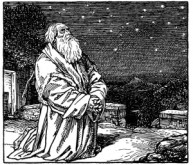 Here the God character’s order specifies what Abraham should leave behind, but gives no details about the future he is walking into. What “God” does communicate is that this move is important for Abraham, not just for God. Rashi (11th-century Rabbi Shlomo Yitzchaki) interpreted Lekh-lekha as “Go for yourself”, i.e. for your own sake. The Zohar (a 13th-century kabbalistic text) interpreted it as “Go to yourself”, i.e. recreate yourself as a new individual, separate from your past.

All the promises of blessing, while non-specific, also serve to let Abraham know that going to the new land will be for his own benefit. This is the first time in the Torah that “God” promises a reward for obeying His directions.

Abraham responds to the divine direction by leaving home for good, as instructed. But he takes some initiative and prepares for his own future by bringing along his wife, nephew, servants, and livestock.

Since the voice of God does not even tell him which way to head when he leaves his father’s house in Charan, Abraham chooses to travel west into Canaan. Only after he has reached Shechem, well inside Canaan, does “God” appear to him and say: To your offspring I will give this land. (Genesis 12:7)

The God character’s method of giving partial directions, promising an eventual reward, and leaving the rest up to the human being seems to be the most successful approach so far. Abraham responds by leaving his old familiar habits behind, and making new choices.

Today, few people hear God giving them direct instructions in Biblical Hebrew. But I can imagine the God character in these stories as an inner voice from the human subconscious, struggling to be heard properly.

There are many ways for a human being to get stuck and wait passively for change, instead of looking for a good action and bravely doing it. At times in my life I have been like the adam, obeying orders without raising questions, avoiding any potential conflict. I had to reach a certain level of misery before an inner voice from God’s snake reminded me that it would not kill me to pick the fruit and liberate myself, to choose my own course and act.

At times in my life I have been like Cain, feeling as though I am at the mercy of a bad desire. Yet eventually I hear the divine hint that I can master the desire, and choose to do good.

Other times, I feel overwhelmed, drowned, by the demands of other people and by the way the world works. I want to make my own little floating container and hide in it. But my conscience nags at me, reminding me that I cannot hide in an ark without bringing my family and hordes of hungry animals with me. God wants engagement with the world.

And yes, periodically I have heard an inner call to leave my familiar but not-so-good life, and set out for an unknown destination and destiny, like Abraham. So far, responding to that voice has led to blessings.

May we all be blessed to listen to our inner “God” voice, and never lose the taste of the fruit from the Tree of Knowledge of Good and Evil.